Warning: This product is region-locked and can be activated only in Europe.

Uplay
This product is currently unavailable.
Get Notified 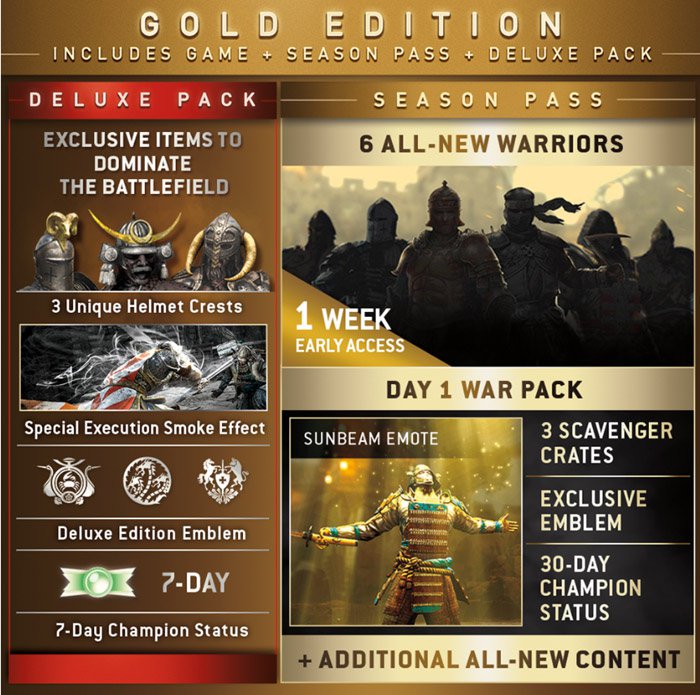 Season Pass
Enjoy a year’s worth of expansions, exclusive content, and more with the season pass. More details coming soon.

Buying For Honor Gold Edition gives you access to the base game, the Season Pass and the Digital Deluxe pack.

In this medieval fighting game, players pick between three types of warriors: the knight, the samurai, and the viking. There are three factions in the game as well and each of these represents one of those three types of fighters. You have the Iron Legion, the Chosen, and the Warborn. Each of these factions has their own unique classes. The heroes that you pick in the game have their own special fighting styles, weapons, and skills. When engaging in melee combat, players engage in the "Art of Battle". This is a complex tactical combat system that puts the two opposing players in a dueling mode. Then, the players clash swords to see which one is going to end up victorious. You can set the direction of your attack to be from above, the left, and from the right. This system allows for exciting and engaging fights, as players can observe their opponent and their movements to predict where the attack is coming from, block it, and then launch a counter-attack.