Your purchased Steam keys will be available immediately. (More)
Once you buy Hide Or Die Steam PC on HRKGame, you are going to receive a digital activation code (aka CD KEY) of Hide Or Die instantly. You can then activate your Hide Or Die CDKEY on Steam and start downloading it!
Trustpilot
Languages 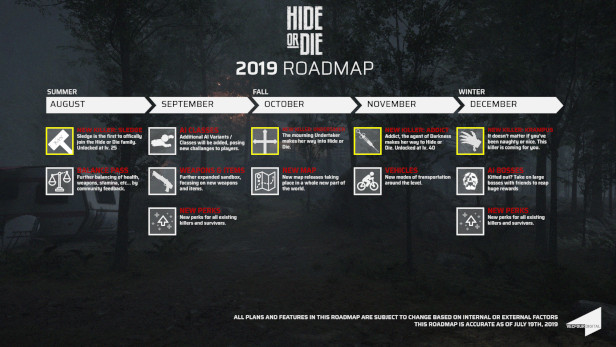 Hide or Die is a large scale multiplayer horror game set in a world corrupt with darkness. Dozens of players take the role as survivors, hiding out in remote bunkers, clinging to their last bits of resources. They must gear up, locate abandoned extractors, re-activate them and escape before the darkness fully consumes them. As the game progresses the darkness will corrupt even the strongest survivors, turning them into powerful and terrifying killers whose goal is only to kill those who remain. When the Darkness overtakes the world, the players with the most darkness are deemed The Chosen and are given the role to guard one of three bunkers which become the only possible escapes for the remaining players. This intense last-minute rush to escape is where The Chosen partake in a killing-spree in this brutal end-game with a fortune in rewards for doing so.

Large Scale
Bale County is a 1.2km² world that was once a calm and beautiful place until the darkness corrupted it. You will explore the aftermath and see how the people have coped. Some joined cults and praised the darkness while others went insane trying to unlock the reason why it happened. The only survivors are those whom found safe haven in the bunkers. There are many unique areas to explore such as the crash site of Flight 36A-15, Hawksbill Mountain, and The Ritual Site. These areas, among others, will help tell the story of what happened to Bale County.

Unmatched Terror
Hide or Die is built from the ground up to be terrifying and is a game where living is tough and death is permanent, you will be placed in a situation where you never feel comfortable in the world around you. Psychological events put the player on edge while the many hunters and enemies make direct interactions extremely tense. One mistake is all it takes to meet your end in this unforgiving world.

Flexible Sandbox Gameplay
Bale County is an unpredictable sandbox world where players will be forced to adapt and where your decisions in-game are not pre-determined. How you decide to play, handle pressure, and pursue victory is entirely up to you. From playing sneaky and utilizing countless hiding spots, to fighting a hunter head-on with any assault item you can find, to even becoming a hunter yourself to join in on the bloodthirsty chase for the next victim.

Collecting Darkness
Collecting Darkness can be done in numerous ways, providing choices in your gameplay that suits you best. Ranging from finding extractors and performing puzzle-esque tasks to gain rewards to becoming a hunter and chasing down survivors, killing them, and reaping their dropped darkness. You decide how you want to handle yourself in this large-scale experience. As a players darkness increases they will become a bigger target to any hunter in the server, putting the player in very challenging situations and creating even more altercations as they climb the in-game leaderboard.

Looting
While on the search through Bale County, loot can be found in every explorable area. Ranging from defensive items, to powerful firearms, and even military experiments can be found and used for defense in this deadly world. Other items, such as Darkness and Credits, can be used to upgrade your character perks and unlock an vast assortment of cosmetics.

Meaningful Progression
Collecting Darkness isn’t for nothing; using collected Darkness players can upgrade their characters with perks granting entirely new sets of abilities to their hunters and survivors. With three perk slots per character you'll find yourself putting together perk builds that drastically alter your gameplay and how you avoid death and deal it.

Numerous Hunters
With 3 hunters at release and 4 hunters in production for addition in 2019, each character offers a unique and different experience to suit anyone’s playstyle. Ranging from long ranged hunters to extra-dimensional terrors, survivors will need to stay on their toes if they don’t want to meet their certain death.

Teamwork Or Deception
Teamwork can be an essential way to combat hunters head-on by joining forces with fellow survivors and gearing up. However, with anyone being able to become a hunter, you never know if your teammates are trustworthy or if one of them is just waiting for the perfect opportunity to strike.

An Important Announcement About Hide Or Die

Hide Or Die was first released into early access on August 1st 2019. Our studio continued to support this game and work on it full-time after the early access release and ultimately exited early access and fully launched on May 1st, 2020. The game has always required dedicated servers for our multiplayer capabilities and we have kept them live since our release earlier this year. Unfortunately the game's revenue will no longer be able to support the costs associated with keeping the dedicated se...

-Fixed some exploitable locations across all maps -A10 on survivor is reduced from always showing hunter position to showing for 3 seconds after entering an active zone (localization text is a bit tiny for now) -Sound sliders combined into a single master to prevent exploiting footstep sounds only -Lucky draw reduced from 20% chance to 10%. -Total item spawn rate in match reduced 50% (important to bring in your preferred item) -Sledge can no longer sprint and aim with ban slam. Basically same fu...

Wanted to give everyone a little status update on the state of things. For now we simply do not have the capability to continue development full time (which was 7 days a week, 10+ hours a day). Despite having mostly positive launch reviews the sales were just not there as everyone knows. We need to transition to development in our free time. This does not mean development of season 2 is abandoned, quite the contrary. We are currently still looking at some events around the Steam Summer Sale (dou...

Today we're updating the game with content, balance, and bug fixes. This is our first major patch. New Map: Swamps - We've added a new map that may bring back some nostalgia from the Kickstarter where it was first featured The Krampus Hunter is now enabled for the backers of his tier. He will be available to all in Season 2 Lots of balance and bug fixes Golden Boy DLC - You've asked for additional ways to support us and the game and now you can look good doing it Localization updates across the ...

This is not a large update but fixes up a few exploits and some balancing issues that needed to be taken care of immediately. Fixes: -More collision blockers in the levels to prevent survivors from getting into spots we don't want them -Fixed deploying item and swapping to create infinite items -Getting stuck while being rescued -Description updates in loadout items -Prevent lucky draw from activating on swapping and limit item inventory to 2 maximum Balance: -Ban slam area of effect reduced -St...