Earn up to $1.84 with our affiliate program! 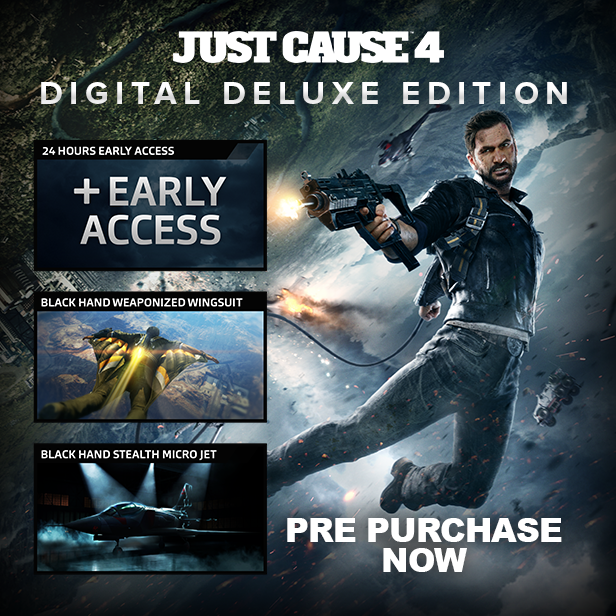 For a limited time, receive the following with your purchase:

Wingsuit technology taken to the extreme! The Black Hand's secret weapon - this prototype wingsuit features boost technology and the ability to be upgraded with bullet spewing barrel rolls and missile barrage attacks. When fully upgraded, this prototype is sure to be the ultimate weapon.

Just Cause 4 sends rogue agent Rico Rodriguez into Solis, an enormous South American territory filled with oppression, hostile weather conditions, and all manner of conflict. You take the role of Rico as he goes on a mission to find out the truth about his past, no matter the cost. Equip your wingsuit, take your grappling hook, and prepare for utter chaos.

Just Cause 4 features the wingsuit which allows you to skydive, fredive, and base jump without any limitations. The weather conditions in the game aren't exactly ideal, as you will be fighting your enemies while huge tornadoes and tropical lightning storms ravage the land, which just means that the action in the game goes from 1 to 10 rather quickly, but these weather conditions can be used to your advantage.

Help the rebellion on their mission to defeat a hi-tech private military organization called the Black Hand. Gabriela Morales, a cunning, skilled, and totally unpredictable enemy is who you will be facing in Just Cause 4. The country of Solis has over 100 square kilometers of terrain filled with danger, secrets, and beautiful and lush environments. Your new tool, the customizable grapple hook will allow you to do all kinds of crazy stunts.

Creative Destruction at its best