Loading
Description Requirements Latest News Reviews
Lock, load and let the gibs fly in OTTTD, a Tower Defence/RTS game with RPG elements that pits you against some of the weirdest creatures in the multiverse.

OTTTD stands for Over The Top Tower Defence, and you'll see why when you're blasting 9 kinds of hell out of a Cactus Ghost that's making a beeline for your battlefield HQ. You play as a commander for HEROCORP™, the 4th largest private military organization in the galaxy. A long period of peace has left the company coffers a little bare so the science division developed Trans-Dimensional Rifts, opening up lucrative opportunities for war in other universes. It's like Starship Troopers meets Stargate meets Spaceballs, with way more explosions!

• Ridiculously definitive edition
Prepare your eyes and ears for incredible deluxe-ness! Featuring crisper sound and high resolution graphics, the PC release of OTTTD will leave you feeling like you've actually stepped into an alternate universe and started blasting everything to smithereens.

• Deep RPG Mechanics
OTTTD lets you choose from 7 hero classes to make up your squad of 3 battlefield employees. The more action they see the more XP they earn, giving you the chance to level them up through custom skill trees, including powerful combat abilities to unleash during the fight.
• 30+ active abilities
• 40+ passive skills
• 30+ equippable weapons
• multiple armor options with stats to suit your play-style

• Weapons! Weapons! WEAPONS!
With 12 tower types to build and 6 different firearm classes, HEROCORP™ has got the hardware to ensure you can wreak havoc in your own personal style.

• Disgustingly varied foes
The range of enemies in OTTTD is wide enough to soothe even the itchiest trigger finger. Floating eyeballs? Check. Gunclams? You know it. Giant armored Wartoises? Of course. You'll even go toe to fin with a giant flying shark, and show the mythological Kraken who's boss!

The Story
The year is 2136. You work for HEROCORP™, the universe’s 4th largest private military force. Your job is to “preemptively defend” the Earth against alien dimensions. As long as you complete the missions under budget and fill out the TPS reports in triplicate, everything goes smoothly.

Is pre-emptively defending Earth ethical? Who cares when the money’s good! 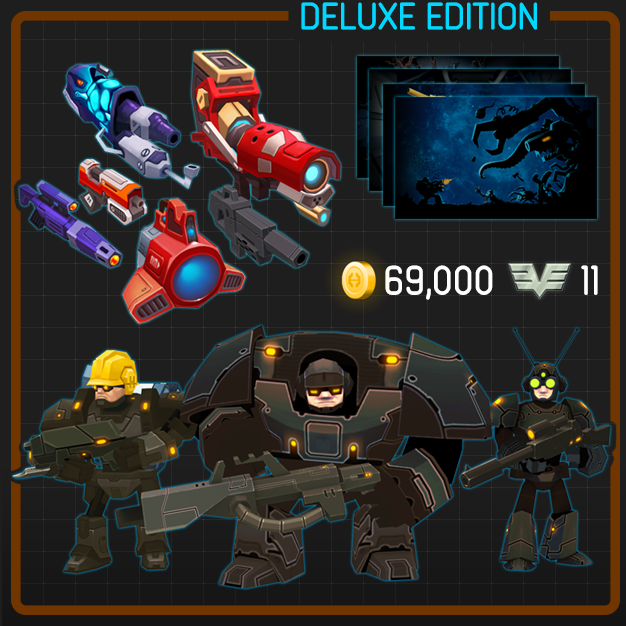 HEROCORP understands the needs of the more discerning battle commander, hence the Deluxe Edition of OTTTD. In addition to everything in the pre-order, you'll get the Deluxo weapon and armor sets. Recently developed by our Lab Division, the Deluxo Range gets more powerful each time your soldier levels up, making it worth its weight in requisition forms. We'll also throw in a Deluxe Wallet, with 69,000 coins and 11 medals to buy yourself something nice. 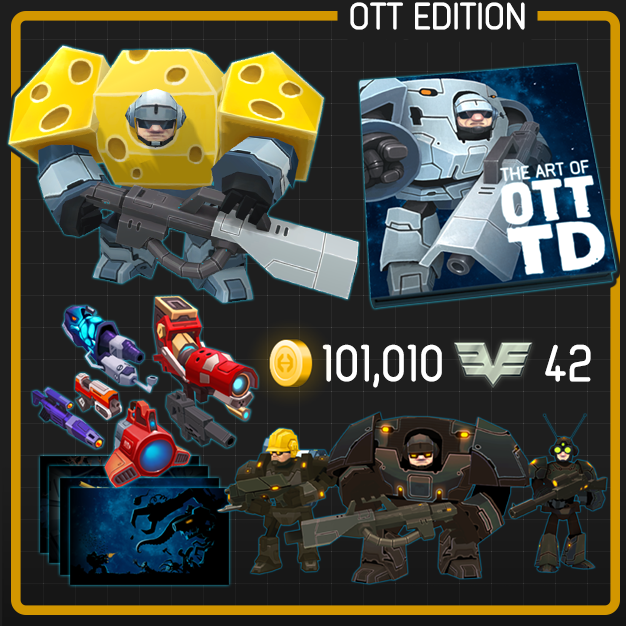 In addition to everything in the Deluxe Edition, the OTT edition comes with rare Cheese Armor set forged by our Dairy Division, which helps your soldiers get more XP and coins on the battlefield.

You will also receive these bad boys:
• An Art Book PDF, full of concept sketches plus more visual treats.
• OTTTD poster artwork. Looks amazing on 100% of walls.
• 3D Printer files for the HEROCORP soldiers, so you can battle command IRL.
• Your name in the credits as an OTT supporter. Welcome to history, baby.
• An OTT Wallet stuffed with 101,010 coins and 42 medals, to give you the financial edge on your enemies."
• Bonus Armour - “Vintage Combat Cheddar” - 20% XP bonus and 5% coin bonus
Moving Out is the latest game in the SMG Game Universe

So we just launched a new game Moving Out and it's nothing like OTTTD however... it's still in the same universe. WHAT! How? I hear you typing on the mechanical keyboard. Ominicorp originally started as Smooth Moves in Packmore in 1982 and through aggressive M&A become Ominicorp some 100 years later. The bot testing in Death Squared lead to military contracts, that lead to them eventually starting private military arm which was OTTTD. This is why the game features the voice talents of Mick Lauer...

We've just released OTTTD on the Nintendo Switch. So now you can buy the game again and play on the go. Or just recommend it to a friend who missed out in 2014! We'll also be doing a small update here on Steam to match some of the features added for the Switch. Hoping to have this done this week. FFWD: You can now speed up the action!! EASY & MEDIUM DIFFICULTY: For those that j...

Listen up soldier! Just a quick update to let you know that Surprise Attack Games is having a sale to celebrate a brand new localisation update for their terminal-based hacking game, Hacknet. So tell all your friends, because there are some great deals, including 50% off OTTTD! GAMES ON SALE Hacknet - 50% Fort Meow - 40% Dungeon League - 15% SMAA - 15% Rogue Continuum - 15% OTTTD - 50% Vertiginous Golf - 40% You can also view the entire Surprise Attack Games catalogue by clicking here! Until nex...

Listen up soldier! Just a quick update to let you know that Surprise Attack Games is having a sale to celebrate a brand new localisation update for their terminal-based hacking game, Hacknet. So tell all your friends, because there are some great deals, including 50% off OTTTD! GAMES ON SALE Hacknet - 50% Fort Meow - 40% Dungeon League - 15% SMAA - 15% Rogue Continuum - 15% OTTTD - 50% Vertiginous Golf - 40% You can also view the entire Surprise Attack Games catalogue by clicking here! Until nex...

Good news: We won best "OTHER"* game in the Intel Level Up contest which means we'll be at PAX Prime showing off the game! Details on the other winners here. Go Aussies! So if you're heading to PAX PRIME come say hi (or Gday if you speak Australian) as we'll be on the Intel stand each day and then... not sure... Maybe just talk about games? or crazy Australian slang or if you're local help us find a good burger joint...