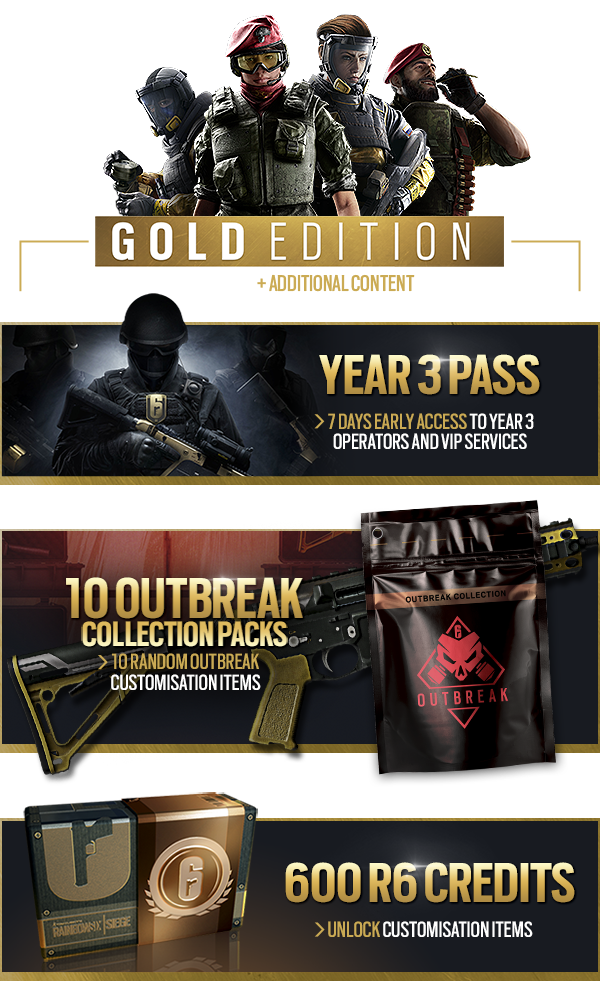 Upgrade to The Gold Edition which includes the full original game, rare new bonus content from the Outbreak Collection, the Year 3 Pass, and a total of 1200 Rainbow Six Credits.

Tom Clancy's Rainbow Six® Siege is an intense, new approach to the first-person multiplayer shooter experience. Choose from a variety of unique elite Operators and master their abilities as you lead your team through tense, thrilling, and destructive team-based combat.

When terrorists are the ultimate threat, and they feel they have the ultimate advantage against you, you don't just need regular soldiers, you need the elite, you need Rainbow Six. And in Rainbow Six Siege, you'll get to put this group of soldiers to the test. For in this game, battles are confined, the environment is just as much a weapon as your guns, and only through tactics and teamwork will the mission be completed. Be prepared to work together with your squad like never before, else, you will fail.
Rainbow Six Siege is a true evolution of the series. For there are sieges, battles of territory where everything is a target that can strength or weaken your foe. The enemy forces you're trying to take out have transformed their bases into fortified strongholds. Complete with traps, barricades, and defensive weaponry able to take out all who dare try to infiltrate. Your team must be ready for anything.
And most importantly, they have to be ready to adapt in order to survive. A plan only is as good as the team that performs it, and even then, plans can be shattered by unexpected things. Be ready to adapt on the fly, whatever it takes to bring the enemy down. Your team is your strength, use them wisely, or else.
Plus, with the Rainbow Six Gold Edition, you'll get loads of DLC content and credits to ensure you never run out of things to do. You'll get 600 credits, access to the season pass of the title, and get access to the upcoming DLC early! Not only that, but you'll get discounts at the store, and more!
You can get your key to the Rainbow Six Siege Gold Edition here. Don't miss out!