Welcome everyone, to a Dead Cells PC review, where we will go over one of the most ambitious and complex action platformers that manages to perfectly encapsulate what makes roguelites so exciting and fun.

But of course, before we do that, let’s answer the most commonly asked questions about the game!

What is Dead Cells?

Dead Cells is an indie rogue-lite action-platformer inspired by Metroidvania.

Who made Dead Cells?

When did Dead Cells come out?

How much does Dead Cells cost?

Where can I find a cheap Dead Cells key?

You can find a cheap Dead Cells key on HRK Game.

A rogue-lite with a ton of flare and content

Dead Cells is one of those rare titles that manages to make a really oversaturated genre work. Roguelikes are a staple of modern gaming, and we’ve had a lot of games with varying degrees of quality tackle such a difficult genre.

So, what kind of people would want to buy Dead Cells on PC? Those that like action platformers that come with permadeath, random rewards, and of course, procedurally-generated levels. Even the premise is quite crazy, but expected of a modern indie game. You play as a parasite that can reanimate dead bodies. Your goal? Clear a way through this island full of undead creatures. If you die, you go back to a prison where you have more dead criminals to possess. Fortunately for you, these dead bodies are quite nimble even though they’re dead. They can parry, do combo attacks, double jump, kick doors, and do much more.

Dead Cells on PC plays a lot like a Mortal Kombat game stuffed into a Metroidvania. It looks great and is readable despite a large number of bodies, gibs, and damage numerals, thanks to sound design that conveys nuances like normal vs. critical hits. One stage is a horrific clocktower with spinning cogs and stone fragments against a flaming cloudscape. Another is a Siren-like settlement on stilts above a river of gore with dazzling lamps. Dead Cells is one game that features many stunning, and often horrifying environments.

Now it’s time for this Dead Cells review to showcase why the game is beautiful and irresistible to play and what makes it so addicting. That is its complicated yet logical risk-reward dynamics and its levels’ combination of familiarity and intrigue. Your character can carry two melee weapons, ranged weapons, spells, shields, and grenades or deployable traps, most of which are purple, green, or red. You’ll discover or buy new toys at random during each run – some buried in treasure chests, others from merchants, others as paired either/or drops – but you’ll need to unlock the more potent varieties first by spending “cells” collected from the dead in safe regions between levels. Before the next safe area, you’ll lose any unspent cells forever, with no Souls-style reclaim-your-XP feature.

Pick your blessings carefully, or they will become a curse

Besides your standard loot, Dead Cells also has temporary boosts. Players can unlock mutations in any safe area. These will give you various buffs, like increased damage after a kill. You can only have three mutations per run. So while Dead Cells isn’t a typical RPG, it does make you think about your build and tactics.

Stages also have special power-up scrolls. They affect health and improve items of a specific color. The color-coded system that Dead Cells uses is very tricky to play around with. Your health decreases for each point you spend on a particular color. So if you go too deep into one color, you will notice that you’re missing a lot of health you could have had. And you never know what kind of useful weapon of a different color may pop up in the near future.

This Dead Cells PC review had me doing a lot of runs in the beginning. Unlike most games of this type, Dead Cells has a lot of diversity. You must think a lot about what you’re taking and missing out on as you move on.

It doesn’t help that weapons all come with special effects. Daggers deal bonus damage when you backstab; spears deal bonus damage if you pin an enemy against a wall. Then you get modifiers that add more insane effects to your items and the level of complexity that Dead Cells can achieve becomes apparent. Which is something most Dead Cells Steam user reviews never pointed out, so I was pretty shocked once I played the game myself. It looked like quite a simple Metroidvania clone, but it’s far from that.

The perfect amount of randomness and challenge

Combining weapons creates new possibilities, and while you’re often at the mercy of randomness, matching them to dangers is satisfying. This sword deals critical damage on the third hit, but speedier adversaries may not allow it unless you mix it with a bow that freezes the enemy. This shield bleeds not only the attacker but also nearby adversaries when you parry, allowing you to ditch your throwing knives and take up that ridiculous broadsword. If you’re looking for a Metroidvania clone that packs a ton of loot and strategy into combat, you should buy Dead Cells.

Short-term and long-term benefits are balanced. An ice blast spell that forces maggots to spring from the dead may be lethal against packs, but not a lone boss. In the following level, a hammer that shuts down all comers may be too heavy. Leveling up in saferooms shuffles modifiers; thus, you may want to hold off on extending enemy health pools. Is a mod that freezes attackers worth the extra damage? Let’s just say that you’ll shuffle around your build quite a lot as you play.

Play it slow, learn the areas

During the early runs for this Dead Cells PC review, my builds sucked. I wasn’t all that familiar with all the item combinations and what they could achieve. But, once you’re familiar with the game’s stages, things change. Dead Cell’s campaign is split into different branches. Each level has an alternative exit that lets you go to another branch. Since Dead Cells is a game that takes a lot of inspiration from Metroidvania, there’s a bit of ability gating.

All stages are also very different from one another, and they all have unique enemies, puzzles, terrain modifiers, etc.

When exploring the Stilt Village, you’ll always come across two locked doors, the keys hidden in side rooms beside a cursed treasure trove and a slew of cannon-wielding pirates. The Forgotten Sepulcher that follows is saturated with the darkness that erodes your health, forcing you to fight in the glare of protective magical lanterns; it always culminates with a sadistic unlit stretch where, after gaining a key, you must double back through a nest of horrors. Dead Cells is a game that doesn’t make life easy for you, no matter how strong you get.

Dead Cells always keeps you on your toes during combat

Within these broader patterns, the game excels at varying the challenge by tossing diverse enemy mix-ups into specific types of areas. You can’t get too relaxed, so the combat always feels intense and filled with tension. For example, a chummy gilded gladiator wielding a chain harpoon may be readily confused at close quarters, but he’s a very different kind of dude when swapping stares across a spike field. When you’re fighting bat demons a few floors down, a wizard with energy bolts that pass through surfaces is just a speed bump. When the first thing you battle in a game still gives you a headache hours later, it says a lot about the quality of the opponent’s design. But even after spending hours playing the game for this Dead Cells review, I would still get hit by the game’s basic zombies, mainly when the antics of beefier prey disguise their wind-up movements. 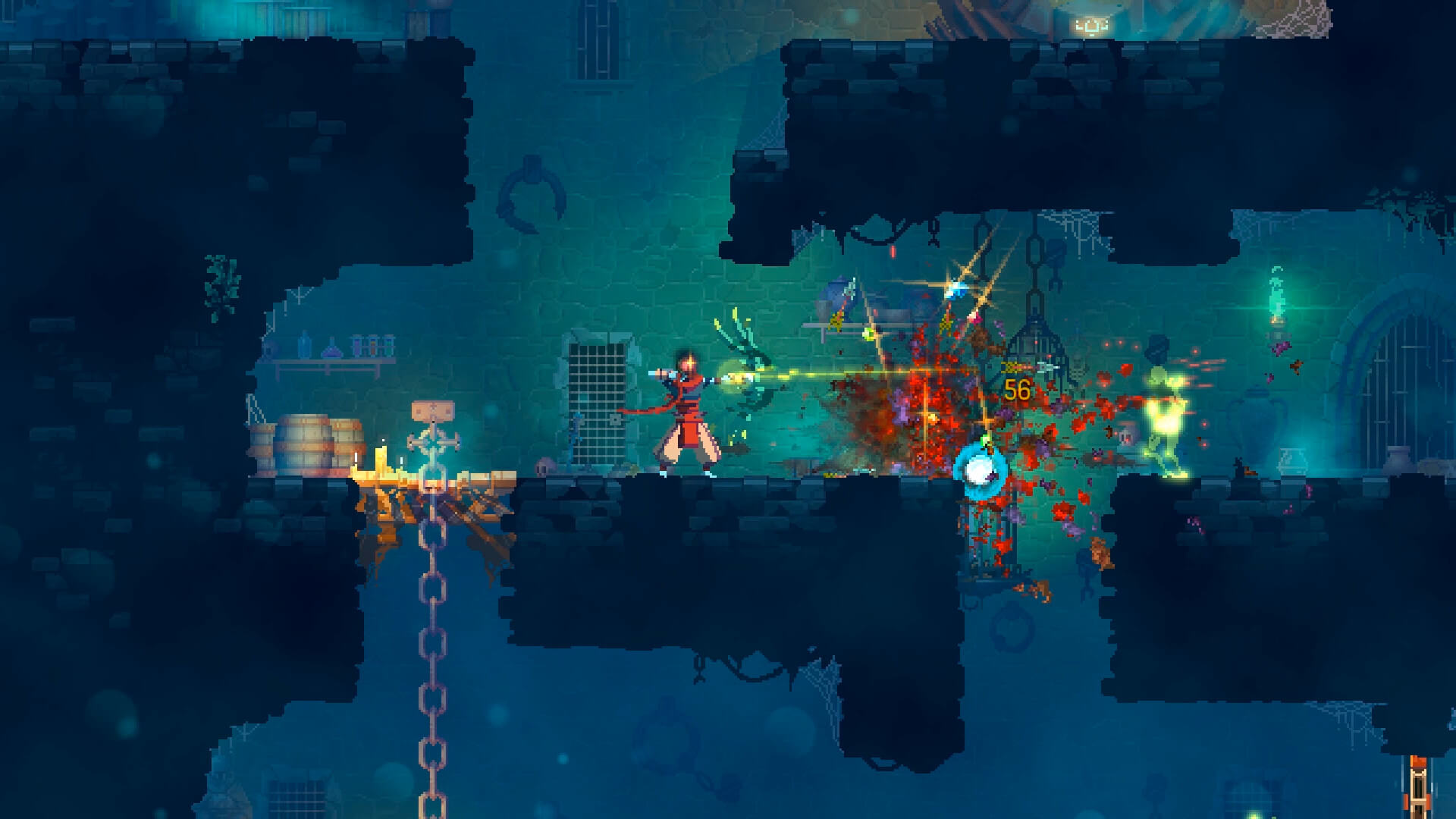 Conclusion – Should you buy Dead Cells?

But, let me clarify now that we’re at the end of this Dead Cells PC review; This is not a game for you if you’re not a fan of this genre. Permadeath is something players either love or hate.

If you fall into the latter group, avoid this like the plague. Many of my friends bought Dead Cells on Steam only to refund the game fairly quickly. Some people just don’t like losing all their progress and being forced to go back to the start. But, fans of the genre will find Dead Cells to be one hell of an experience. Full of diversity, challenge, beauty, and savage violence, it’s one roguelike that’s a must-play in my book.

You can buy a Dead Cells key on HRK Game today for a great price!

Should You Buy The Sims 3: Supernatural? – PC Review

Should You Buy Nobody Saves the World?

Should You Buy Nobody Saves the World?