Official gaming merchandise online retailer Merchoid has revealed an officially licensed ‘Merry Gearsmas’ Christmas Sweater for all you Gears of War fans out there. You will be able to sport the 2017 Holiday season with a chunky, knitted sweater which has the Crimson Omen Logo on the front, accompanied by two lancers and a team of Swarm Pouncers pulling Santa’s sleigh.

Also, the sweater comes with a DLC code which you will be able to redeem on Xbox One and Windows 10, which offers an exclusive Christmas themed lancer skin. This will be the only method of obtaining the skin, and Merchoid are aiming to ship out the sweaters by the end of this month. Meanwhile the DLC code will be sent out to customers in December, and can be activated by players on December 15th. 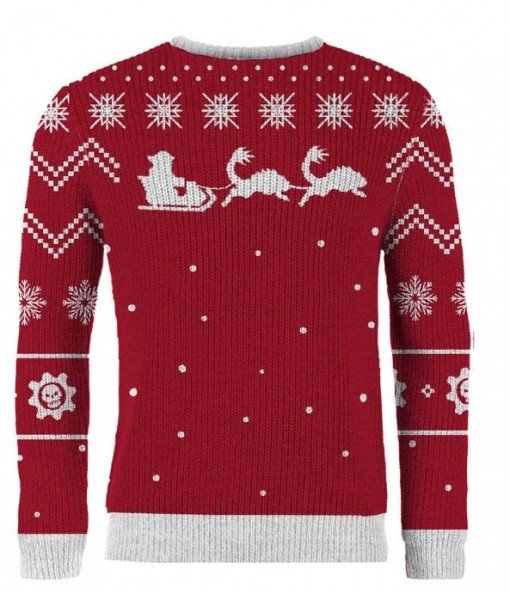 The gaming Community Manager for Merchoid stated: “The Lancer is a truly iconic weapon in all of gaming. With this festive DLC, Gears fans have an opportunity to assault the Holiday both in-game and in real life. Lock ‘n load – prepare yourself for a truly Merry Gearsmas.”

If you would like to pre-order to ‘Merry Gearsmas’ Christmas Sweater, which has been officially licensed by both Microsoft and The Coalition, you can do so now via Merchoid. The cost of the sweater will set you back £36.99/€49.99/$54.99, and these prices all include free shipping worldwide.