A Year Of Rain

Your purchased Steam keys will be available immediately. (More)
Once you buy A Year Of Rain Steam PC on HRKGame, you are going to receive a digital activation code (aka CD KEY) of A Year Of Rain instantly. You can then activate your A Year Of Rain CDKEY on Steam and start downloading it!

Earn up to $0.1 with our affiliate program!

A Year Of Rain 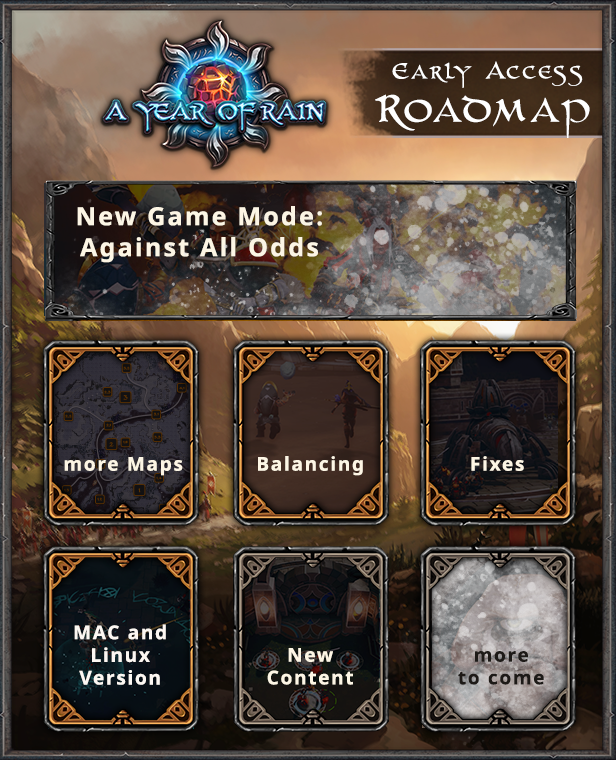 This world is a harsh and unforgiving place.

Its people have to fight for every scrap. Tenacious tribes, nomadic clans or those huddled in the shadow of those with power... they're all caught in a cycle of war and violence, to wrestle from the land what little sustenance it provides.

Two old friends want to break that cycle and create paradise amidst the desolation. A tempest of change is brewing on the horizon.

Choose one of three rival factions and get immersed in a gameplay mixture of base building, resource gathering, unit recruiting and battling against or alongside others players in campaign or skirmish modes. Structures and units can be upgraded in order to enhance efficiency and power.

Conquer your enemies with your carefully assembled army led by a legendary hero!

The ultimate Team RTS - play together across all game modes! Select from one of three roles to unlock special technologies and coordinate with your ally to determine your team’s strategy. Alternatively, you can always command your AI companion to deploy its troops according to your masterplan.

A Year Of Rain’s co-op campaign is designed with a team of two in mind.
The epic story features a range of iconic characters and locations. During your journey you must strategize, survive ambushes, uncover secrets and wage war – always with the option to experience the story together with another player.

The classic skirmish mode is being developed for competitive matches from the very start, including replays, statistics and an observer mode. Those new to the genre can use integrated build orders to get their bearings, while seasoned players will find detailed match statistics to further improve their game – easy to learn, hard to master!

In the world of A Year Of Rain, three unique factions find themselves in a struggle for power. Each faction features three powerful heroes to spearhead your armies.

House Rupah is led by an ambitious man from the northwest, called Jaidee Rupah. He is ready to claim unclaimed lands to make a name and a legacy.

The Restless Regiment. Led by the infamous Lady Llorona, they all dance on her strings and either serve her in mindless obedience or zealous devotion fueled by singular, driving purpose or the torment of martial memories.

The Wild Banners are a coalition of nomads, hunters, tribes, forgotten and fallen civilizations as well as lone wanderers. They chose not to belong where so called civilization thrives. They are beastly savages for some, and tenacious survivalists for others.

Dear Community, it has been roughly 3 weeks since we talked about the path that A Year of Rain will be following in the future and we are overwhelmed that those of you who tested out the changes have brought up 100% positive feedback about the new state of the game, even though they were sad, that the game won’t grow further from this point on - which is definitely understandable. None-the-less, this proves to us, that our decision to change the multiplayer system to a Peer-to-Peer System brough...

{STEAM_CLAN_IMAGE}/34699683/cce59e30d9d75cdccb59e209597efdefeb41f660.png Heyho everyone, as explained 2 days ago, the hotfix that will change the multiplayer system among other details, is now live. Please check out all the changes and tell us what you think, as this decision wasnt taken lightly. For an overview about the situation of A Year of Rain you can click here! And for the complete Patch Notes you can click here! We hope you will find that this solution is still preserving the most uniqu...

{STEAM_CLAN_IMAGE}/34699683/18bc16307ca98ec44cd583ca1d352d5f747fcaca.png Dear Community, We now are able to give you insight on our likely last big Update for A Year of Rain. We are sorry for the time of silence, though we wanted to be completely sure, that everything will work out as we decided on. This means as well, that the Update will already hit in the next 2 days. Our goal from the start was to show our own individual passion and love for the RTS genre, and simultaneously gain new experie...

A Year Of Rain - Hotfix Version 1.1.16736 February 2020 In case of questions, please join our Discord server. Peer-to-peer Multiplayer As we're shutting down the official A Year Of Rain servers, we still want to make sure that you get the absolute most and best out of the game. Thus, we have added peer-to-peer support to the game to still allow you to play with your friends any time you like, along with a lot of additional ("Beta") content for you to explore. The Hotfix will hit the servers on T...

{STEAM_CLAN_IMAGE}/34699683/f51960adc8f9d01dad7b9d87ed7f5c170c445b96.png In 2019, we announced and released A Year Of Rain! This was an incredible journey for us. We'd like to thank everyone involved in A Year Of Rain - ranging from Game- and Daedalic Staff, their families, our Business Partners, our helpful MvPs to all our players and loyal fans (that's you)! A big thank you from the whole team. See you in 2020! For those who celebrate these days, like our Staff team does: Happy Holidays! {STEA...