Earn up to $2.24 with our affiliate program!

The Gold Edition includes the Standard Edition and the Season Pass. 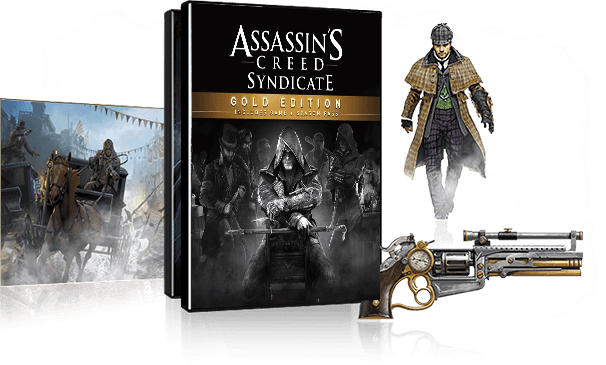 The Assassin's Creed series is nothing if not progressive, for not only do the assassins in the game evolve, but the world around them evolves. With each new game comes a new time period, and a new change to explore the world and history like never before. For Assassin's Creed Syndicate, the journey towards the modern world takes a big leap.

For here you are in London, in the year 1868. This time period was defined by the Industrial Revolution, and it's through this revolution that you'll lead one of your own as Jacob Frye.  This man believes in helping the less fortunate from those who would crush them underneath the foot of "progress". You'll soon see how right he is to take this fight, as you go and free people from harsh environments to try and make London better.

But you can't do it alone, raise an army through supporters and take on anyone who would try and stop you. Assassin’s Creed Syndicate's action is fast-paced and brutal. As a master of combat, combine powerful multi-kills and countermoves to strike your enemies down. Plus, there's also your sister, who has a unique style all her own.