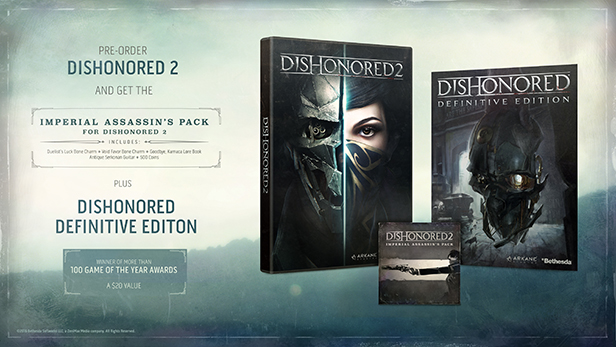 Buying Dishonored 2 Limited Edition gives you access to the base game, the Imperial Assassin's pack, and a digital copy of Dishonored: Definitive Edition.

Dishonored 2 is the sequel to the brilliant first-person stealth/assassin open-world action RPG that is Dishonored.

Once again you will take the role of a supernatural assassin armed with all kinds of unnatural abilities and gadgets and weapons. The choice in what kind of approach you have when it comes to dealing with your targets and enemies is yours and yours alone. Want to absolutely crush and kill everyone that you come across? You can do that. Want to finish the game without harming anyone? You can do that as well.

Dishonored 2 features a world where magic and industry collide in order to show us brilliant environments, gripping characters, and impressive worldbuilding unlike you've ever seen in a title such as this. The game offers you two characters to play with. You can take the role of Empress Emily Kaldwin, or you can reprise your role as the royal protector from the first game, Corvo Attano. This title has an impressive combat system which shows just how brutal violence can get in this game, and it also has a complex stealth system that allows you to move through the shadows without being seen.

The story in Dishonored 2 reacts to you according to the choices that you've made. Each of these hand-crafted missions will end up differently depending on how you approach them. This game is set 15 years after the death of the Lord Regent. Now, an otherworldly being has taken the throne, and it is up to us to travel to the coastal city of Karnaca in order to find the key that will help Empress Emily restore her powers and reclaim the throne.