Region
EMEA EU US
Platform
This product is currently unavailable.
Get Notified 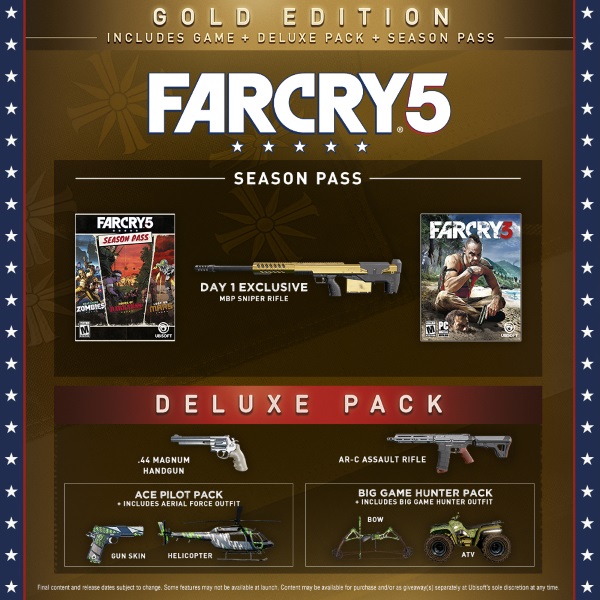 The Far Cry 5 Gold Edition Steam Edition unlocks this version of the game on the Steam platform.

Buying the Gold Edition will unlock the base game, the Digital Deluxe Pack, and the Season Pass. Three amazing adventures await, where players get to face flesh-eating zombies, vicious Vietcong soldiers, and mutated arachnids on Mars. The Season Pass also gives you access to Far Cry 3, one of the best 2012 shooters!

Far Cry 5 is the eleventh installment in the Far Cry series and it's also the fifth main title in the series. The game was developed by Ubisoft Montreal and it was published by Ubisoft. Far Cry 5 is available on the  Xbox One, PlayStation 4, and Microsoft Windows.

As most of the previous games in the Far Cry series, Far Cry 5 is also a first-person shooter that is set in an open world environment filled with places to destroy and bad guys to kill. If you don't want to explore the land by foot, there are lots of vehicles available to you that you can use to get around faster. Far Cry 5, unlike the previous games in the series, will allow you to create your very own character, which can be customized in all sorts of ways. You can change your appearance, gender, and skin tone to be whatever you want it to.

As always, players will have access to all manner of weaponry, from assault rifles to pistols, machine guns, and so on, and this Far Cry game actually puts a lot more focus on close-quarter combat situations than the games before did with the addition of quite a wide range of melee weapons.

Far Cry 5 also introduces the brand new "Guns for Hire" system which increases the depth of the combat system by adding allies which will fight with you. This system gives you the ability to convince the locals to join you in your battle, and each companion that you acquire has certain unique skill/weapons which give you tons of more combat options.

The game's campaign can be played either solo or with a friend through the co-op mode. Far Cry 5 has a complex map editor.