Earn up to $5.31 with our affiliate program! 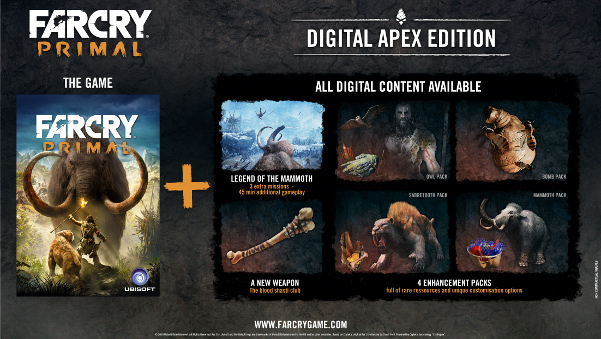 Buying Far Cry Primal Apex Edition Steam Edition gives you access to the Apex Edition of the game on the Steam platform.

Experience a Far Cry game unlike any other before it as you dive into an old world full of savage beasts, mesmerizing environments, and wild, deadly encounters. This is Far Cry Primal, and you're about to enter the brutal Stone Age that has many challenging adventures for you to go through! The game was developed and published by Ubisoft on March 1st, 2016.

No more gunning people down in tropical areas or the Himalayas. This time we enter the fight for survival, as humankind takes on many dangerous threats that aren't human. But, don't worry, there are still bad humans that you need to take out in Far Cry Primal. The open-world sandbox gameplay that the series is famous for is coming back, so you best be prepared to ride gigantic mammoths and swift sabertooth tigers into battle. Craft deadly weapons from the Stone Age, take down vicious predators and outsmart the humans that oppose you. A never before seen story, environment, and encounters wait for you in the majestic old world that's brimming with species that have long been forgotten. Hunt enormous Elks down, ride through sinister redwood forests or marvel at the sight of captivating glacial mountains as you learn more about the world and instead of being the prey, you slowly turn into the apex predator.

Far Cry Primal features a setting never visited often in video games, a range of creatures that you can ride into battle, a primitive language that increases the immersion of the game, and much more, so buy the game today and enter the Stone Age and prove that you can survive it!