Chinese New Year has brought many special events to certain video games, if the developers wanted to do them that is. MMORPGs are doing them in bulk, but also, shooters are having fun with it. There’s Overwatch, who is making this a yearly thing for them, and then, there’s also Gears Of War 4. This is slightly surprising, as the game doesn’t seem like a fit for this event, and yet, the team behind the game have made it very real, and, it’s going on right now.

The team at The Coalition told all on their website. And…they also admitted that they kind of forced the event tie-in:

“We’re celebrating the Year of the Dog with a Horde Madness event that puts the focus on the Swarm’s very own attack dog – the Pouncer. (Yes, we did have to force that tie in a little bit). Prepare for an overload of Pouncers and Juvies with weakened fortifications as you fight to survive all 25 waves on either Normal or Insane difficulty.” 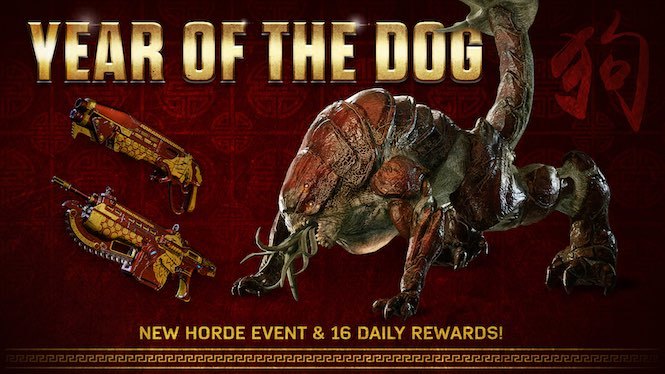 Anyway, you have until the 23rd to get the reward waiting for you at the end of wave 25. The Midnight Omen weapon skins. What’s more, they’re making it so there’s only two variations of the weapon to decrease the chance of getting a duplicate.

But that’s not all they’re offering:

Oh you thought that was it? Nope! We’re giving away a bonus Year of The Dog weapon skin every single day beginning February 16th until March 1st.

So there you have it, a very special event for Gears of War 4, and one that will be lasting on many parts for many more days. It’ll be interesting to see what other holidays The Coalition decide to bring into the title. Either way though, this will keep players entertained.

Dark Souls: Remastered On Switch Being Handled By Veteran Team